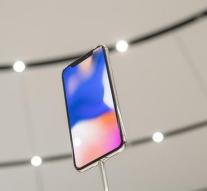 amsterdam - With the iPhone X, Apple engineers delivered the most powerful smartphone all the time. The fact that it took only ten years to get there since the very first iPhone, is due in part to a number of Dutch companies.

When launching a brand new phone, it's a standard ritual: the test that shows how the processor is doing it relative to the competition. This week, the researchers attacked their seat. Because the iPhone X was not only outstanding in comparison to other phones, but also with Macbook Pro, the most expensive and powerful laptop from Apple's range.

An error? No, because different websites run the test independently and came across the same result. Apple has managed to build a smartphone that has the price of a good computer, but also the performance associated with it. And all in a device that just fits into a pocket.

There is a chance that BE Semiconductor Industries, shortly Besi, will not say anything to you. But without this Gelderse company, where Richard Blickman has been in charge for 22 years, the iPhone X has long been not so handy. Besi makes advanced machines to protect the chips with a coating. Because chips are getting smaller, the industry is becoming increasingly dependent on Blickman and his.

How much Besi deserves exactly to Apple is not clear. In fact, the company itself can not confirm that it is doing business with Apple because it has signed a confidentiality statement. However, the close cooperation was revealed by this paper two and a half years ago.

Other Dutch companies are listed on the official list of 200 major Apple suppliers. We also find chemical company DSM, chip manufacturer NXP and lead manufacturer Lumileds. Lumileds was completely owned by Philips, but this summer, it sold 80% to an investment company.

NXP is also a former Philips daughter, and these are not the only companies in the list that ever belonged to Philips. LG Display, founded as LG. Philips Display, Bloomberg earns $ 1.68 billion in its relationship with Apple. Taiwanese chip manufacturer TSMC (also ex-Philips) would send $ 1.11 billion to Cupertino annually.

The Dutch chip machine rock ASML (also ever part of Philips), like Besi, is not on the list. But the Veldhovense company has such a high market share that it is highly unlikely that its machines are not involved in the production of the iPhone.

If Philips had held its activities in the chip industry, it would have had a billion agreement with Apple now. But it's still crazy: according to former Philips chief executive Cor Boonstra, he and financial director Dudley Eustace spoke in the US in the spring of 1996 with the Apple Summit on an acquisition.

If the deal had continued, maybe the Philips iPhone was presented in Eindhoven last week. However, Philips saw the deal, and according to Boonstra, that was all right. 'We would have stifled that company with our culture,' he said in his biography published earlier this year. 'We would have completely crippled Apple in various ways. '

In addition to the iPhones, two other Apple products also make their existence possible to the Netherlands. For example, the new Apple Watch includes a built-in sim card, an innovation in which Gemalto is an important player. Gemalto, however, does not want to say whether it is the supplier, though it is Apple's certified sim supplier.

In addition, Apple topman Tim Cook made a new attempt to position Apple TV as a gaming platform. The Sky game, which will appear exclusively on Apple TV, takes place in an automatically expiring world. Technology to make this possible is patented by Antenna Company. The Eindhoven company was not available on Friday.