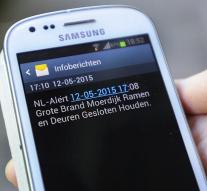 - The national control message of NL-Alert, which is broadcast on December 7, was received by about 7.1 million people from twelve years and older. That is 49 percent of that age group. In the previous test the control message reached on June 1 only 35 per cent of the target.

This is the National Coordinator for Counterterrorism and Security announced Thursday. The control message is broadcast twice a year so that people can check that their mobile phone is correct for NL-Alert. With NL-Alert, the government can people in the immediate vicinity of an emergency, such as a major fire, an impending flood or storm, inquire with a text message.

KPN, Vodafone and T-Mobile sent the control message on December 7 through their 2G, 3G and 4G networks. From early 2016 the government NL-Alert can also broadcast over the 4G network of Tele2. More and more smart phones are automatically set to receive NL-Alert.

On Monday, June 6th, 2016, the government sends back an NL-Alert control message.