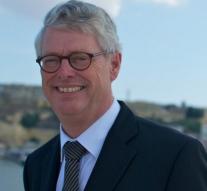 brussels - The Dutch director of the European asylum agency EASO get on . Rob Visser starts on November 1 as secretary to the Council of State in The Hague. He led the Malta -based EASO since February 2011 .

Fishermen departure comes at a bad time , as EASO plays an important role in the reception and registration of refugees. His successor is not expected for February. An interim director takes the honors which until then. " It is very sad to have to leave ", Visser says to the news site Politico, referring to the large numbers of refugees coming to Europe.

It was personal " not ideal " for him to extend his contract.

He was for five years . EASO supports the EU Member States in dealing with asylum seekers and has about a hundred employees.