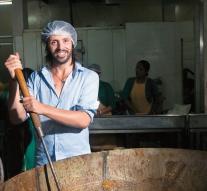 - Food at famous eateries on the street costs in India are often just an apple and an egg. But how delicious those cheap meals can also taste, you buy immediately a big chance with the infamous, sickening 'Delhi Belly'. That could and could otherwise find Dutchman Jesse van der Sand.

What began two years ago as an ambitious plan, so meanwhile, begins to take on large forms. His company Janta Meals meanwhile has 20 branches.

At Janta cheap meals are served, especially Indians who earn between 100 and 200 euros per month. The company is still on track, according to the entrepreneur to spread its wings across the country.


Because the concept is a simple but essential change in the lives of many poor Indians, thus realizing more and more people in the Asian country. 'Contrary to the places where these people usually eat his meals at Janta Meals indeed clean,' stressed the 33-year-old Van der Sand in Gurgaon, a suburb of New Delhi where his business is located.

'For converted between 25 and 45 cents, we serve nutritious and delicious dishes. I myself eat there often. Then at least I know I got into something healthy,' said the Dutchman.

Because of alarming stories about the eateries on Indian streets, is no lack, as also says Van der Sand. 'For example, here in India was a scandal where heaps of sawdust was used in seasoning. And oil is where the food is prepared usually hardly changed on the street. That while the people who eat these foods often long hours in dirty conditions work. All the more important therefore that for them are also good options for eating hygienic. '


As far as Van der Sand, the concept Janta Meals-free translated: 'Food for volk'- as big as many other food giant, such as McDonalds or the local Haldiram's. 'All the challenges are here in India to achieve this big.

Nbsp; For example, a huge logistical task for all that food be served as soon as possible. Especially when the temperatures above 40 degrees, the food spoils quickly. It remains quite puzzling to meet in such circumstances to our own standards. '