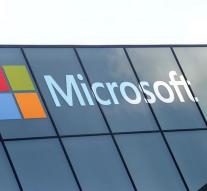 - The new Microsoft datacenter in North Holland was put into operation, as well as a similar building in Ireland. The American company announced Tuesday to want to come up with data storage in the UK. The press release also reported the opening of the centers in Central Lake and Ireland.

For example, data of customers who use Office 365, are stored in these data centers. These are mainly people who keep data in the cloud, ie not only on their own computers but also on Microsoft's servers.

The building in Central Lake in North Holland offers storage capacity for users in Europe, Africa and the Middle East, Microsoft said.