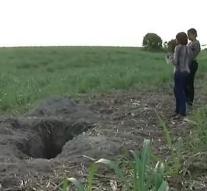 amsterdam - The two Dutchmen who were liquidated in the Dominican Republic last Monday would be Rachid Benbouker, 34, and Cuma Ceviz, 36. That reports local news sites which include pictures of the passports of the two victims. Their bullet-screened bodies were found in a pit on a sugarcane plantation in the hamlet of Piedra Grande on wednesday.

Justice of the Central American country says it is very likely to be a settlement in the drug circuit. Media reported about residents of the plantation. They would have heard shots and then have seen a plane take off. The next day, local authorities took a look and did the terrible find. A paper found on the site crimes would refer to a drug gang who is behind the liquidation.

Many Dutch criminals are involved in drug trafficking and transport in Central and South America. For example, Dutch soil criminals often find the right routes to smuggle clandestine cocaine into our country.

Mohamed, the brother of Rachid Benbouker was killed in December 2011 at the rumbling triple Purmerland murder. Along the canal avenue at Ilpendam he was crushed, pulled out of the car and killed with one shot. His body was found back in the water weeks later. The perpetrators have been sentenced to years of imprisonment.