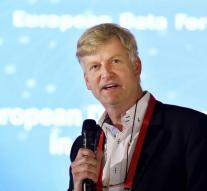 - Professor Wil van der Aalst of the Technical University in Eindhoven won the most valuable German research award. An amount of 5 million euros is attached to the prestigious Alexander von Humboldt Prize.

He is called the 'Lionel Messi of Computer Science' or the 'Big Data Wizard'. In the global rankings for the most cited researchers in the field of Informatics and Electrical Engineering, place 14 is the only Dutch researcher in the top 250.

Van der Aalst leaves for the Rheinisch-Westfälische Technische Hochschule (RWTH) in Aachen, the university that nominated him for the prize. ' RWTH has a special chair 'Process \u0026 amp; Data Science ', on top of the Alexander von Humboldt Professorship. That's a great opportunity. But I also have mixed feelings. TU Eindhoven gave me great opportunities and appointed me as a 26-year-old university lecturer at a young age. I also appreciated my appointment as a university professor and the creation of the Data Science Center Eindhoven around my person. '

The Germans are attracting our scientists. Since 2009, there have been no less than 6 Dutch top researchers who have won 'Alexander von Humboldt Prize'.