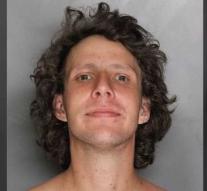 sacramento - A 25-year-old drunk American driver returned to his burning car after a traffic accident to light his cigarette.

He drove about 120-130 kilometers per hour on the highway near the city of Sacramento in California when it went wrong. He crashed on top of another car, after which the car flew in the air. An agent who witnessed the accident saw Robert Quigley change places with his female co-driver. The drunken man later admitted that he had driven.

According to an eyewitness, the shirtless car driver went back to the car to light his cigarette. He partially lost his eyebrows. 'Yeah, I'm not afraid of fire, I make this very often', he said with his cigarette in his mouth.

In addition to scorched eyebrows and a burn in his neck, Quigley was not injured. His co-driver, too, was nothing wrong. He was arrested and transferred to the prison in Sacramento. He was also arrested last week after he was drunk behind the wheel.