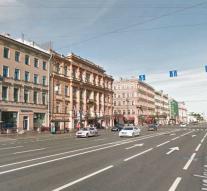 st.petersburg - A 30-year-old drunken Russian has hit several people on the pavement of the Nevsky Prospekt in St. Petersburg. A 40-year-old American and a 39-year-old woman from Moscow came to...

The driver, who had no driver's license since November last year, has been arrested. The media published video images of the car driving on the sidewalk at a very high speed and grabbing several people there.