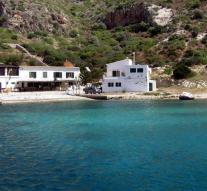 palma de mallorca - Two Britons were arrested on Mallorca after they repeatedly left their two children at the hotel to get together in one of the local bars. Hotel guests were seriously concerned about the girls aged 4 and 11 years old.

Amanda Wignall (37) stayed at the same resort, Club Palma Bay, and saw the girls dance alone one night. She stepped on the girls, after which the eldest indicated that her mother and stepfather were drinking something and that they were often left alone.

Several hotel guests, including Wignall, decided to take care of the girls. 'When we eventually found their mother in the evening, she was completely lousy,' the British woman tells DailyMail. 'She was so drunk that she could not lift her head to speak to us, let alone talk to us normally. '

Her friend and travel companion Kate Lees placed an emotional message on Facebook immediately after the holiday. 'They wanted to stay in our room while they did not know us. I said I could not do that and called the front desk. This morning I had to see to it that the two beautiful girls were picked up by the Spanish social services and taken to a Spanish childcare, while their parents were arrested. I have never seen so much fear in two little faces. '

According to the concerned girlfriends, the girls could have ended up as Maddie McCann, who disappeared from a hotel room in Portugal in 2007 and has never been recovered.