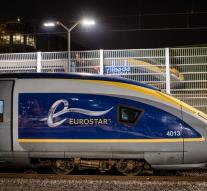 calais - A Eurostar train from Paris to London was stranded four o'clock on Monday on Tuesday in Calais due to a couple of drunken Britons. After train passengers had complained about the aggressive two, the French police decided to arrest the drunkards. Before that, the train stopped at the station Calais-Fréthun.

Due to misunderstandings many doors of the train were opened. Trainers who did not do anything about the incident even took the platform to create a gap. It was now possible for people who had not traveled, to get on the train too. As a security measure, the police and customs decided that all 770 travelers had to be checked again. The entire check took four hours, French media reported Tuesday.