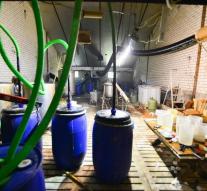 haler - The police discovered a large drugslab in the Limburg village of Haler, well for the production of more than a thousand kilograms of amphetamine paste. At the invasion the police arrested a resident. A man from Eindhoven was also arrested.

The lab was housed in a pig barn at a farm on the Lochtstraat. A special unit of the police started saturation on Saturday.

At the barn is a vulture cellar where 100,000 liters can be used. Presumably, the criminals have discharged drug waste. The amount of waste it is not known yet. But given the amount of amphetamine paste, it has to be large amounts, according to the spokesman.

The lab was discovered during a major investigation by the Brabant Zuidoost police. Sunday is being brought out more.