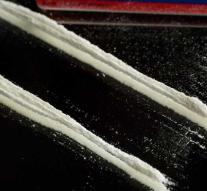 lisbon - The availability of cocaine in the European Union is increasing. The drug is also easier to get and has the highest purity in ten years. The EU drugs agency (EMCDDA) writes this in the drugs report 2018.

According to the agency, there is an increase in the production and availability of drugs in Europe. Cocaine is the most widely used illegal stimulant drug in Europe. Approximately 2.3 million young adults (15-34 years) have used the drug in the past year.

Most traces of cocaine in municipal waste water were found in cities in Belgium, the Netherlands, Spain and the United Kingdom.

Spain has lost importance as a transit country for the white drugs. Cocaine is smuggled more often through northern container ports. According to the agency, the Belgian ports are increasingly important. Almost half of all cocaine seizures in Europe are done there, according to the report.

According to the agency, more and more drugs are produced in Europe. The Netherlands and Belgium are still at the forefront when it comes to the production of XTC.