Home / World / Drowning removed from the sea near Indonesia 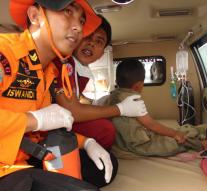 jakarta - Dozens drowning in Indonesia are found in the sea. They might as officers during severe weather have left their ferry off the coast of the island of Sulawesi. According to the head of the rescue team is possible the ship capsized.

Fishermen would have seen four living drowning in a trap. According to the Ministry of Transport were later another 21 people discovered in the water. Other passengers are, according to the rescue team still in the sea.

The ferry was Saturday already in trouble. The strong wind made the rescue operation as impossible. According to the news Detik there were 108 people on board the ship, while another news talked about 122 passengers. According to officials certainly come two people killed.

Authorities have deployed three ships to find the missing vessel. According to police, the ship's engine gave out, but it is not sunk.