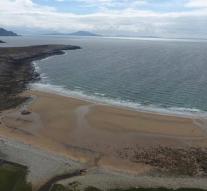 achill island - A beach thrown by storms 33 years ago from a remote island along the west coast of Ireland, suddenly returned after the sea deposited thousands of tons of sand on the rocky coast.

The 300 meter long beach near Dooagh village on Achill Island disappeared in 1984 when storms drove off the sand, leaving only a series of rocks. But due to the high jump of the past month, the Atlantic has brought back the sand to the joy of the locals.

'This is extremely important,' said Sean Molloy of the local tourist agency against the Irish Times. He recalled how the popular beach counted four hotels and a number of holiday homes.

The island with 2600 inhabitants is part of the Wild Atlantic Way, a tourist trail that extends from the south of the country to the northwest.