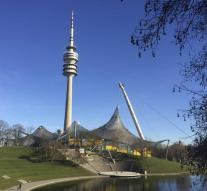 - A drone flown at the Olympic Tower in Munich and then 181 meters poured down. The 1.7 kilo monster hit to death on the sidewalk, not even 10 meters away from a father and mother who were walking there with their two children.

At the moment of impact on the ground were located at the foot of the tower an estimated four hundred visitors, said police in the Bavarian capital. No one was injured. The 36-year-old owner of the drone was arrested.

The Oympiatoren state in the former Olympic Park. The attraction is 291 meters high and was built in the late sixties on the occasion of the Olympic Games in 1972. At 181 meters there is a revolving restaurant. The surrounding park is popular with drone owners, although the use of powered flight models is prohibited.