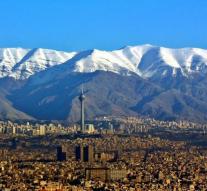 beirut - The Iranian Air Force Friday over Tehran has an unmanned aircraft shot down. The drone approached the offices of President Hassan Rouhani and spiritual leader Ayatollah Ali Khamenei.

The drone owners turned out to have no mischief. It went according to a source of news agency ILNA to documentary filmmakers who wanted to shoot from the air. They had received permission, but were accidentally near the 'forbidden zone' where are located important public services.