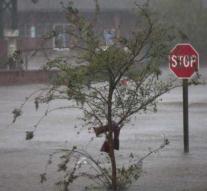 washington - While the tropical storm of Florence is scouring the southeast of the United States, a small army of drones is ready to help quickly absorb and even repair the damage.

More than fifty drone teams have been recruited for this. Each team usually has more than one drone, which means that there are 100 to 160 drones in the air to mainly spot damage to the electricity network.

The energy companies have roughly 40,000 men ready to repair damage. But the drones can be put to work earlier in flooded areas. The aircraft can monitor electricity stations and restore electricity wires.

The tropical storm Florence slowly decreases above South Carolina, but causes severe flooding in that state and in North Carolina, where it landed, reports the National Hurricane Center (NHC).

Florence, which first had hurricane power, was probably toned down to tropical depression on Saturday night. The storm has now killed at least five people.