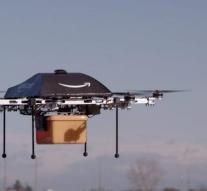 - A drone who supplies groceries and talks with the customer at the front door. That speech technology patented Amazon web giant.

This technology has been recorded on Amazon August 29 by the U.S. Patent and Trademark Office as Speech Interaction For Unmanned Aerial Vehicles. The technology makes it possible to communicate directly with surrounding drones.

Amazon has plans to expand even more in logistics. Also in moving and transport by road and air, Amazon grows.

Amazon does not bring it alone, it also comes with consumers. In addition to customer data for future use, drones equipped with cameras would be ready to provide a pesticide with a weed overgrown immediate pesticide or the service of a local gardener.