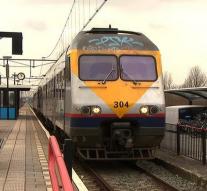 - By his own error saw a machinist in Belgium earlier this year his train ride away without a driver. The man got out to fix a technical problem, but was, according to investigators forgot to turn on the brake.

The empty passenger train drove about 12 kilometers without a driver by mistake on 18 February. When Tienen station passed another driver managed to jump on the train and stop the vehicle.

A report by the Investigating Accident and Incidents on the Track (OOIS) shows now where the time went wrong: the train was initially stalled by reducing pressure in the line of automatic brake.

The driver was trying to problem solve from his cabin, but failed. When the man got out he could overcome the pressure loss by closing a valve, when he saw the train moving off downhill.

The train according to the OOIS was not provided with a wegrolbeveiligingssysteem. Still, it eventually ended with a whimper: no one was injured.