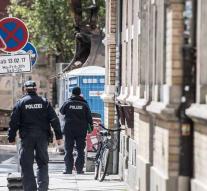 dresden - The authorities in Dresden in Germany struggle with a bomb from the Second World War. Two attempts to defuse the projectile failed. It is not clear when a third attempt is made.

The bomb was found on Tuesday during construction work in the Löbtau district in the west of the city. Meanwhile, around 9,000 people have had to leave their homes around the site. Twelve hundred of them reside in emergency shelters.

A first attempt to defuse the bomb was aborted due to danger of explosion. On the second attempt, the ignition was removed on Wednesday evening, but insulating material caught fire and the bomb exploded in part. Nobody was injured. It is not clear how much explosive material is left behind.