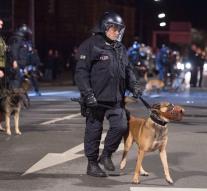 dresden - In the German city of Dresden on Monday evening thousands of protesters on the leg. Both proponents and opponents of anti-Islam movement Pegida are divided evenly. The same applies to the police. Until now expired several peaceful demonstrations. When Pegida sounding Christmas carols, the opponents include the Ode an die Freude (Ode to Peace) of Schiller, with the famous phrase 'all people become brothers'.

The State Opera of Dresden joined the protest against and issued a choir to sing off. On the banks of the Elbe kept thousands Pegida supporters while their weekly meeting. Again somewhere else in the city, at railway station Dresden-Neustadt, stirred a large group of anti-fascist activists.

A large police force is placed on the leg to prevent pro- and anti-Pegida protesters meet. It abounds in the center of the riot police, armored cars, water cannons and police dogs, sketched German media. Police from Saxony has been reinforced for the occasion by colleagues from Berlin and North Rhine-Westphalia.