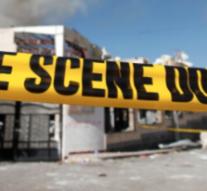 - A three-year-old boy was accidentally shot by another child in a place in the US city of Detroit. The police had the child, whose age was not disclosed, the gun in the hand when the gun went off suddenly.

The toddler died on the spot. The incident was in Ypsilanti, a city southwest of Detroit. It is not known whose weapon is and how the child was coming.