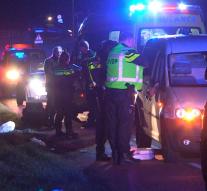 zuidoostbeemster - The recordings of the Dutch drama Black Tulip his last night rocked by a terrible accident. An employee of the production team was at the end of the shooting day in Zuidoostbeemster by a car. The 26-year-old woman from Belgium is in critical condition to the hospital. Feared for her life.

The victim ran after the shooting on the dark Kwadijkerweg back to her car when she was hit from behind by a colleague. Witnesses report that the driver of the car was working on her phone, but that's not confirmed.

A trauma team was to resuscitate the victim on the spot, after which she was taken to the hospital. The police took the driver of the car for questioning and her vehicle impounded for examination.

Black Tulip is about two rival families in the bulb. The drama, starring big names like Huub Stapel, Linda van Dyck, Gijs Naber and Anna Tracker was made especially for the on-demand channel Videoland, but now also broadcast by RTL 4.