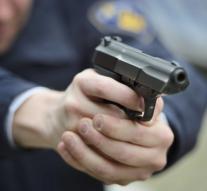 A police spokesman said that the identification of the victims is still underway. There are no released details of the incident. It is also not known what the relationship is between the victims.

'It's Christmas Eve. It's shocking, 'said a worried woman in the neighborhood who knew at least one of the victims. The area is generally known as quiet.