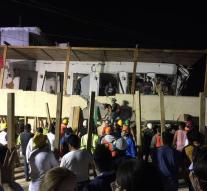 mexico - In a collapsed school in Mexico City, up to now, the bodies of 22 children and two adults have been found. The Enrique Rebsamen school collapsed after the earthquake of 7.1 which hit Mexico on Tuesday.

Desperately seeking parents and rescuers between the fragments. The search went on overnight. Thirty children and twelve adults are still missing.

'Many children are taken from the debris, dead and alive. But from my seven-year-old daughter I have not heard anything yet, 'said the 32-year-old Adriana D'Fargo. During the night three survivors have been found.