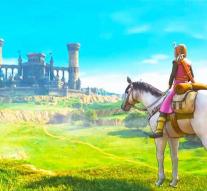 - The Dragon Quest games in Asia are just as big as the iPhone in the West. As soon as a new part appears, people are standing in front of the stores rows to get the game. With this eleventh game in the official role-playing-game series, developer Square Enix sticks to the strong traditions that have made the series great.

This, while the game seamlessly knot countless storylines into one great fairy tale. But some traditions in the game will not appeal to every lover.

In Dragon Quest XI, players get into the shoes of a sixteen-year-old hero. As a baby, he was washed up in a basket at a quiet village in the countryside, where he grew up as a simple boy. But one day it appears that this seemingly simple boy has more to offer than he thought. He is the reincarnation of the legendary Luminary and possesses mysterious powers. Time for an adventure of more than one hundred hours during which players travel through the enormous fairytale world of Erdrea. The arrival of the Luminary is just in time, because the dark forces are on the rise and everywhere in Erdrea samples are appearing to terrorize the villages in the world.