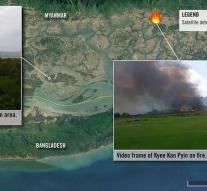 - Some 80 villages of the Rohingya Muslims in Myanmar have gone up in flames for the last few weeks. Amnesty International says that the army has flattened entire villages with the help of groups of citizens.

Amnesty researchers have analyzed different data, such as current burns, satellite imagery and photo and video. In addition, they spoke with dozens of eyewitnesses in Myanmar and Bangladesh. 'Everything indicates that the Myanmar army has carried out a well-planned plan for the past three weeks through the systematic burnout of Rohingya villages in the state of Rakhine,' the association wrote in a statement.

On the basis of satellite imagery, Amnesty argues that it can not be about natural fires. The organization also sees that in towns and cities only houses and neighborhoods are burned where Rohingya's live, while other ethnic groups also live.

'A 27-year-old man from Inn Din told how on August 25 the army, together with a civil guard, surrounded the village. They shot in the air and then in the wild road at Rohingya residents who fled. The man climbed into the woods and watched how the soldiers stayed in the village for three days and stolen steel and houses. The same pattern is seen in cities, 'said Amnesty. Other eyewitnesses confirm this way of working.

Tirana Hassan, Amnesty's head of the crisis investigation team, speaks of a campaign aimed at expelling the Rohingya from Myanmar. 'There is no doubt possible: this is ethnic cleansing. '