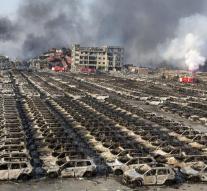 - A Chinese court has 25 officials and 24 people jail sentences imposed for business involvement in the series of explosions in the port city of Tianjin, at which 165 people were killed last year. This was reported by the state news agency Xinhua Wednesday.

The penalties range from six months to a suspended death sentence which is usually commuted to life imprisonment.

Huge explosions at a chemical warehouse caused an estimated 900 million in damages. Research showed that the explosions were caused by hazardous substances were set aside on the ground carelessly and illegally.