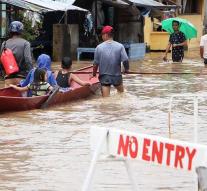 manila - In the eastern Philippines, at least 20 people were killed by landslides and floods after heavy rainfall. Also more than 5000 people in six provinces are homeless...

In the affected areas, further searches are being made for missing persons. According to the weather service, the eastern and central provinces have to take into account even more rainfall, although the depression has weakened.

Every year the Philippines is hit by about twenty hurricanes that can cause landslides and flooding.