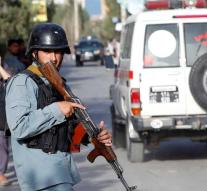 kabul - Because of a suicide attack on a training center in Kabul, at least 48 people were killed and 67 people were injured on Wednesday. The Ministry of Health has announced this.

The terrorist act took place in a predominantly Shia district of the Afghan capital, where it was relatively quiet in recent weeks. The responsibility has not yet been claimed. Attacks on Shiite targets were in the past usually claimed by Islamic State.