Home / World / Dozens of people are killed by explosion Mali 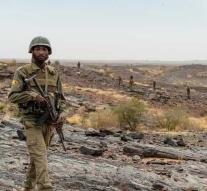 bamako - At least 26 people were killed when a vehicle in Mali drove on a land mine. Many victims come from neighboring Burkina Faso, report the state television. Several people were injured.

The affected vehicle came from Burkina Faso and would have driven the mine at the village of Boni. According to the authorities, there are fighters active in the area who cooperate with Islamic State, but it is unclear who put the explosive down. An army spokesman initially spoke of thirteen dead and two seriously wounded.

In another incident in the same area, several deaths would also have occurred. The army said two soldiers were killed by an attack at the place Youwarou. Seven attackers would also have been killed.