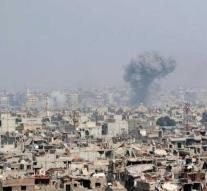 beirut - An air strike has cost the lives of dozens of people in eastern Syria. The Syrian Observatory for Human Rights talks about 54 deaths, including 28 civilians.

The target of the attack was an ice factory a few kilometers from the border with Iraq, says the Observatory. The building is in an area that is owned by the IS terror group. In addition to civilians, jihadists would also have been killed. Dozens of people were also injured. Some victims are still in a critical condition.

The attack may have been carried out by the international coalition that is fighting the field soup. A coalition spokesman acknowledged that the US or Americans' partners may have carried out attacks in the area. '