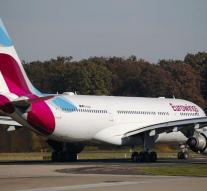 - A pilot of the German airline Eurowings has taken off Friday, but left behind while sixty passengers in a bus on the tarmac of the airport were still on the way to the unit. Forty passengers from the first bus were quite impatient aboard when the pilot departed for Dresden.

An airport spokesman confirmed Saturday against the Rheinische Post that the pilot apparently did not want to wait any longer, because the flight was more than two hours behind schedule. The unit was too late arrived from Italy. There were therefore at check under the angry passengers skirmishes.

The unit would be to fly to Dresden 19. 05 hours, but eventually chose to 21. 35 hours airspace. The sixty stragglers are housed in hotels. Their luggage Friday it arrived in Dresden.