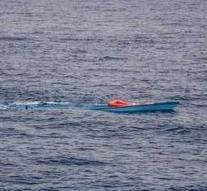 geneva - Dozens of refugees and migrants have drowned after a boat capsized off the coast of Yemen. Survivors said, according to the International Organization for Migration (IOM), that more than 150 Somalis and Ethiopians were on board the vessel, which sailed in the direction of Djibouti.

The 'unscrupulous' smugglers who steered the craft were reportedly trying to hand over their passengers more money. It would also have shot on the passengers of the crowded boat. 'At least 30 people were killed by this tragic incident,' according to the IOM Friday. Care workers later took care of the drowning people.