Home / World / Dozens of ex-servicemen Iraq slain by IS 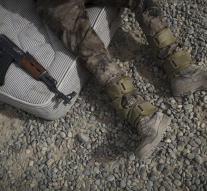 geneva - Warriors terrorist organization Islamic State (IS) have killed forty former soldiers in the Iraqi city of Mosul. Their bodies were in the river Tigris, which runs through the city dump. That said a spokeswoman for the United Nations on Tuesday.

The ex-soldiers were killed Saturday. They were together with other citizens kidnapped by IS in Mosul and the surrounding villages.

IS Monday tried to move some 25 000 civilians forcibly from Hammam al-Alil, a town south of Mosul. IS wanted to use the civilians as human shields likely. The citizens left dozens of buses and trucks from Hammam al-Alil, but most returned under threat of patrolling jets in the area, the spokeswoman said. Some buses reached Abu Saif, a town about 15 kilometers north of Hammam al-Alil.

According to the spokeswoman brings IS citizens increasingly to Mosul, where they are placed around sites that may be considered as a military target. 'That seems to endorse the statement that they intend to use these people as shields, and they want to ensure that the area is populated with many citizens, to frustrate military operations. '