Home / World / Dozens of deaths in air strikes in Syria 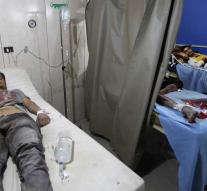 beirut - A total of 38 people were killed in air attacks on a village in north-western Syria. This is reported by the Syrian Observatory for Human Rights, which is based in the United Kingdom, which speaks of a bloodbath.

Due to the attacks on the village of Zardana, some fifty people were also injured. Several victims are in critical condition. Rescue workers are still looking for survivors in the rubble. According to the Observatory, the bombardment was probably carried out by Russian fighters. Russia supports the regime of President Bashar al-Assad in Syria.

The province of Idlib is one of the last remaining areas that is still controlled by Islamic insurgents. Tens of thousands of fighters and civilians have fled to Idlib in recent years. They are mostly from areas that were once again in the hands of the government army.