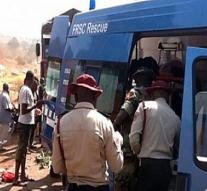 lagos - Two minibuses with at least eighteen passengers were bumped on fire on a busy road between Lagos and Ibadan in southern Nigeria on Saturday. A traffic police spokeswoman could not say anything about the number of victims, but an eyewitness told the Nigerian press agency NAN that the only survivor was a baby wrecked by one of the vans.

The vans were catching up with other vehicles as they headed forwards. Due to overdue maintenance on the motorway, serious accidents often occur.