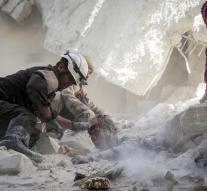 aleppo - Supporters of Assad raided his house in Aleppo and 82 civilians they encountered murdered. Among them were women and children, says a spokesman for the United Nations.

It is not clear whether they are forces of Assad, or sympathizing groups.

According to the UN, 82 people on the spot shot in four areas of Aleppo. Among them were 11 women and 13 children.

'There is not a shred of humanity in sight in Aleppo,' warned the spokesman.

UN chief Ban Ki-moon expressed his concern Monday when it became known that Aleppo again almost entirely in the hands of government forces. They make many gains since the air attacks are staged on the rebels. Thousands of civilians caught like rats in a trap and could not move.

Aleppo has been since 2012 in the hands of rebels. They are against the government and to the president of Syria, Bashar al-Assad step down. Assad does not think about it and put a lot of violence in October to stop the rebels. By the fighting have fled some 3,000 children.