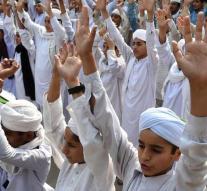 kabul - By an air raid on a religious ceremony, at least 36 deaths in the Afghan province of Kunduz last month. Most victims are children, reports UNAM UNAMA. According to the Afghan government, the attack was directed, among other things, against high-ranking Taliban leaders.

UNAMA concludes that at least 71 people were injured in the attack, including 51 children. Attack helicopters of the Afghan air force fired missiles and bullets at a crowd that had gathered near a Koranic school. According to witnesses, there were about 500 to 1500 people present when the aircraft opened fire.

The question is to what extent precautionary measures have been taken to prevent civilian casualties, UNAMA states in a report. UN researchers have spoken with dozens of witnesses, victims, government officials and other parties involved.