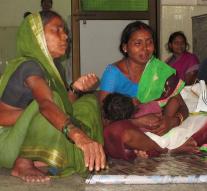 new delhi - In a hospital in the North Indian state, Uttar Predesh has died sixty children over the past few days.

According to local media, this is due to a shortage of respiratory equipment. The hospital denies this and says that the children died a natural death.

There are 34 newborn babies in the neonatal intensive care department, twelve children who suffer from neck pain and fourteen children who have died due to an unknown cause. With how many of these children the oxygen deficiency has been fatal, it is not known yet.

The shortage of equipment was caused by local media because the hospital had not paid the bill to the supplier. That would have removed equipment from the hospital.

The hospital's head of medical affairs denies the lack of equipment. He said there would have been defects in the oxygen classes, but that problem would have been resolved by another supplier.

The authorities in the state have announced an investigation. The spokesman for Indian Prime Minister Modi has said that the matter has the 'highest priority' with the prime minister. Politically, the policy of the party of Modi, the Bharatiya Janata Party (BJP), which forms the government in the state, has been strongly criticized.

The criticism then left angry blood at the BJP, who opposed the opposition, 'giving the health problem unnecessarily a political charge'.