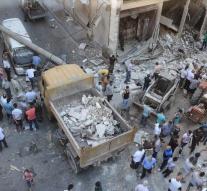 aleppo - Rebels in Syria on Tuesday reopened the attack on parts of the city of Aleppo which are government-owned. At least eight people lost their lives and dozens of people were injured, the BBC reports.

The offensive follows after the Syrian army had taken the only access to the part of town that is in the hands of the rebels. The 250 000 to 300 000 people in that part of Aleppo in danger of becoming isolated from the outside world.

The Syrian army bombarded the rebel subsequent air attacks. According to the Syrian Observatory for Human rights are met at least 27 people dead. In recent days, dozens of people were already dead after fierce fighting in Aleppo.