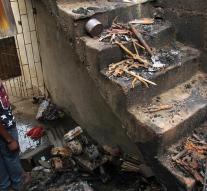 lagos - With the collapse of a five-storey building in Nigeria's business metropolis Lagos are at least 35 people died. Still under construction building collapsed Tuesday, but Thursday was still searching for further victims among the rubble, said a spokesman for the local crisis management team.

The authorities have after the accident on twenty different sites in Lagos stopped working. In September 2014 came the collapse of a building in the town of 116 million people.