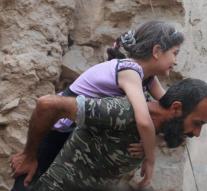 - Rebels in Syria have sat parts of the northern city of Aleppo under fire. Thereby certainly were 38 civilians, including children fourteen and thirteen women, were killed. It reports the Syrian Observatory for Human Rights.

The part of town that Saturday was bombarded in the hands of the government. The Syrian army is trying for some time to encircle the entire city and is the only access to the part of town that is in the hands of the rebels approached a kilometer. The 250 000 to 300 000 people in those parts of the city in danger of being closed to the outside world.

The rebels in Aleppo were sat in turn bombarded from the air. In addition, at least five people were killed, according to the Observatory.


The Syrian regime announced earlier this week a truce, but as with previous files made this little practical difference. Still, the military said Saturday to extend the ceasefire by 72 hours.