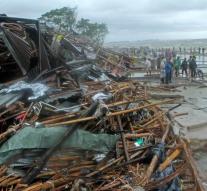 dhaka - In Bangladesh, at least 22 people were killed by a cyclone. Most of the victims were slain by fallen trees or collapsed houses, reported local authorities Saturday. More than 50,000 homes have been damaged by the natural disaster.

'Blending of cultures does not work '


The cyclone Roanu arrived in the port city of Chittagong on land. That place is in the southeast of Bangladesh. As a precaution had been evacuated half a million people. The danger, according to meteorologists certainly not gone yet. They warn of heavy rain and tidal waves.