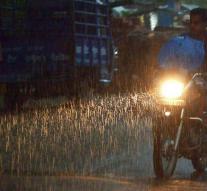 Most of those injured in Bihar, where 53 dead were counted. It was mainly people who were working in the country while heavy rain and thunderstorms erupted, the BBC reported Wednesday. It's monsoon time in India, a rainy season that is accompanied by thunderstorm.

In India, about 2,000 people a year fall victim to lightning. Most of them come between June and September when the monsoon manages.