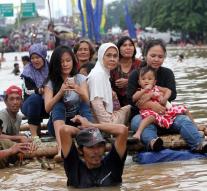 jakarta - The number of deaths caused by the heavy rains in Indonesia has risen to at least 47. The rain had last weekend caused landslides and floods in Central Java.

Dozens of houses were damaged and were swept away by mudslides. Thousands of homes flooded.

According to the authorities twenty people missing after the landslides in nine villages in the district Purwerejo. Several rescue teams were deployed, with the help of soldiers. They look for victims, and bring people from the affected areas to temporary shelters.