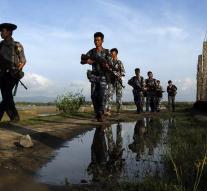 - Fighting between the military and what the Myanmar government calls a militant Islamic group, have this weekend dozens of lives. The encounter took place in the Rakhine province in the northwest of the country.

The fights of the weekend are the result of an attack on October 9 at three border crossing points on the border with Bangladesh by militants. In addition, nine policemen were killed. This weekend, according to Burmese media were slain at least 28 of the attackers. Two government soldiers were killed.

Security forces have the area largely populated by Rohingya Muslims from the outside world sealed off even social workers and observers can not get in.