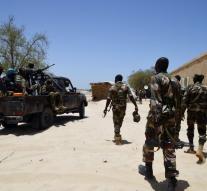 - By three bomb attacks on a market and a refugee camp in the Chadian town of Baga Sola Saturday least 38 dead and 51 wounded. Which announced the authorities in Chad . It would be suicide bombers.

It is suspected that the Islamic extremists of Boko Haram are responsible for the explosions. Boko Haram is mainly home in Nigeria, but also carries out regular attacks in Chad and other neighboring countries.