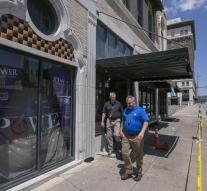 little rock - After the shooting party on Saturday morning in a nightclub in the US state of Arkansas where 28 injured fell, the police arrested two suspects. One of them is a rapper who had performed at the Power Ultra Lounge in Little Rock. The police suspect that an argument between members of two rival gangs escalated in the club.

Through the shooting, 25 people shot shotwounds and three others were injured when club visitors ran to the exit in panic. The victims are between the ages of 16 and 35, all of whom are expected to survive the incident, police said at a press conference.

The shots fell on the early Saturday morning (local time) when the club was still full of visitors. What the role of the rapper from Memphis was, remained unclear. The 25-year-old was arrested on Sunday morning with a man of the same age after a performance in a nightclub in Birmingham (Alabama).